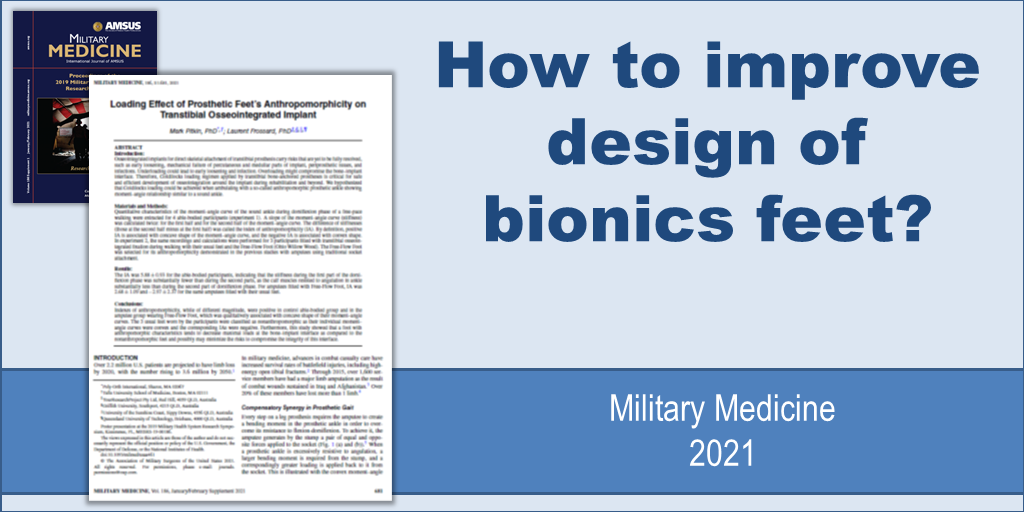 Introduction: Osseointegrated implants for direct skeletal attachment of transtibial prosthesis carry risks that are yet to be fully resolved, such as early loosening, mechanical failure of percutaneous and medullar parts of implant, periprosthetic issues, and infections. Underloading could lead to early loosening and infection. Overloading might compromise the bone–implant interface. Therefore, Goldilocks loading regimen applied by transtibial bone-anchored prostheses is critical for safe and efficient development of osseointegration around the implant during rehabilitation and beyond. We hypothesized that Goldilocks loading could be achieved when ambulating with a so-called anthropomorphic prosthetic ankle showing moment–angle relationship similar to a sound ankle. Materials and Methods: Quantitative characteristics of the moment–angle curve of the sound ankle during dorsiflexion phase of a free-pace walking were extracted for 4 able-bodied participants (experiment 1). A slope of the moment–angle curve (stiffness) was calculated twice: for the first half and for the second half of the moment–angle curve. The difference of stiffnesses (those at the second half minus at the first half) was called the index of anthropomorphicity (IA). By definition, positive IA is associated with concave shape of the moment–angle curve, and the negative IA is associated with convex shape. In experiment 2, the same recordings and calculations were performed for 3 participants fitted with transtibial osseointegrated fixation during walking with their usual feet and the Free-Flow Foot (Ohio Willow Wood). The Free-Flow Foot was selected for its anthropomorphicity demonstrated in the previous studies with amputees using traditional socket attachment. Results: The IA was 5.88±0.93 for the able-bodied participants, indicating that the stiffness during the first part of the dorsiflexion phase was substantially fewer than during the second parts, as the calf muscles resisted to angulation in ankle substantially less than during the second part of dorsiflexion phase. For amputees fitted with Free-Flow Foot, IA was 2.68±1.09 and−2.97±2.37 for the same amputees fitted with their usual feet. Conclusions: Indexes of anthropomorphicity, while of different magnitude, were positive in control able-bodied group and in the amputee group wearing Free-Flow Foot, which was qualitatively associated with concave shape of their moment–angle curves. The 3 usual feet worn by the participants were classified as nonanthropomorphic as their individual moment–angle curves were convex and the corresponding IAs were negative. Furthermore, this study showed that a foot with anthropomorphic characteristics tends to decrease maximal loads at the bone–implant interface as compared to the nonanthropomorphic feet and possibly may minimize the risks to compromise the integrity of this interface.

Scroll back to top